← The Best Actuarial Schools How to Become an Actuary Fast (With Extra Tips for Students!) →

Do you really need to know a programming language to become a top candidate?

Here’s the thing. It’s totally possible to get hired without ever learning a programming language, but that will make your actuarial journey way harder than it has to be!

That’s because 64% of actuarial employers prefer a candidate that knows a programming language.

That’s right! You’ll find that many actuarial employers would actually prefer to hire someone with programming knowledge. That’s why taking the time to learn one is so important.

It can make the difference between being just another candidate and being the top candidate for the job. It could be the reason you get hired, or not.

This blog post will cover everything you need to know about programming languages, including the top five languages to learn and how they’re used in real actuarial work.

Plus, all the answers to your burning questions are below – like how many languages to learn or which one you should learn first. So, in no particular order, here are the top five programming languages for future actuaries!

VBA is a common programming language in the actuarial career because you can use it to automate tasks in Excel. That makes it very useful for actuaries who use Excel all the time! If you learn VBA, it’ll definitely come in handy throughout your actuarial career by saving you time and reducing your workload.

So, what would a practice project look like with VBA? I’ve actually done TONS of projects with VBA, but the most memorable one was automating my past company’s actuarial reserve reporting process. Before it was automated, this process took a lot of work. I had to copy and paste between workbooks and do a bunch of manual data manipulation.

But once I automated it, the whole process became much easier. I could get the data from our modeling software (GGY Axis), copy it to a workbook, clean it up, move it to another workbook, and do a bunch of calculations all in one step!

Python is an increasingly common programming language in the actuarial field. That’s because you can use it for so many different things, and you can learn it for free!

Most programming languages require you to have a license to learn how they work and use them, but you don’t need to do that for Python. This makes it an easy language to pick up.

In actuarial work, Python is mostly used to import data from CSV files to do calculations. You couldn’t use VBA for this because it couldn’t handle that much data – it would probably crash.

That’s one reason why you might choose to learn Python. If you know you’ll be working with huge amounts of data, you want to pick a programming language that can keep up with you. Python is great for that!

This programming language is mostly used in the property and casualty (P&C) insurance industry. I even used it in one of my internships! In that job, I used SAS to calculate the number of auto insurance policyholders who had the winter tire discount. Let me sum up the project for you. Feel free to make up your own version of this project to try for yourself!

Here in Canada, we can get a lot of snow and ice on the roads. Getting winter tires gives you more traction and makes it safer to drive in winter conditions. Since they make you less likely to get into an accident, insurance companies give you a discount for getting them.

So, I used SAS to figure out which percentage of our policyholders had this discount and see if it matched our targets. This involved accessing huge data sets—so big they were stored off-site! I was able to do all that using SAS.

Another thing about SAS: it’s pretty easy to pick up if you know another programming language! When I started my internship, I had no experience with SAS, but I was able to learn it just using what I knew about VBA and reading code written by others. With some trial and error, I was able to figure it out. If you want to learn SAS as a second programming language, that’s something to keep in mind!

I never had to use R in an actuarial job, but I did learn it in school!

It’s also on one of the SOA exams – Exam PA (Predictive Analytics). You’ll use RStudio and Excel to clean and transform your data, fix any errors, and explain your results. So, if you’re planning to go the SOA route, you’ll need to learn this language anyway. It might make sense for you to pick it up sooner rather than later!

R is mostly used for statistical analysis and graphing. In my projects with R, I had to do a lot of mean and median calculations, Chi-square testing, and graphing. That’s exactly how actuaries would use R on the job too!

Did you know that SQL is the programming language that actuarial employers request the most?

I found that out in my analysis of 100 entry-level actuary job posts. In the video below, I collected tons of data on what current actuarial employers are looking for, so you don’t have to guess. It’s worth a watch if you haven’t seen it yet!

Anyway, back to SQL!

Actuaries use SQL to access data from huge datasets that are way too big to store in Excel. It’s often used in combination with Microsoft Access.

Personally, I used SQL to automate my past company’s source of earnings report. A source of earnings report breaks down how an insurance company made money over a certain time period. In this case, I had to use SQL to gather data about every single policyholder and all the claims they made over the whole lifetime of the policy.
Sound like a lot of data? It was! But I did this so I could make sure our report was totally accurate.

See, the data we received every month was almost always summarized. We didn’t receive all the data, and that was what I needed for this project! This is a great reason to use SQL.

When you need to use huge amounts of data that are way too big for Excel, SQL is your friend!

Should I learn all of these programming languages?

NO! You don’t need to learn all five of these languages to become an actuary. (And I don’t recommend it!)

You might be thinking, “What if I don’t know the language an employer wants? I might not get the job!” Don’t worry, because it doesn’t really work like that!

Knowing just one programming language gives you an incredible advantage. Once you know one, it’s much easier to pick up on other languages.

You can even offer to take a course in the language they want you to know before you start the job. This will make the employer more confident that you’re willing to learn and adapt to what they’re looking for.
So, now that you know you only have to learn one programming language, you’re probably wondering…

Which programming language is the best?

If you’re not sure which language to learn, here’s my suggestion: either learn VBA or Python.

These two languages are the most versatile for actuarial work. While SAS and SQL are mostly for collecting and analyzing lots of data, VBA and Python can be used in so many different ways. Learning one of those languages will help you get the big picture and show you just how much you can do with a programming language!

Then, you can apply that knowledge to SQL, SAS, R, or any other programming language that you need to know for work.

Learning a programming language doesn’t have to be overwhelming. If you aren’t sure where to start, you might want to check out the Actuary Accelerator Community (AAC)!

Members of the AAC get access to courses on Excel, VBA, and Python! So, if you want hands-on experience with Excel or a programming language, you’re going to love the courses and practice projects you find in the AAC.

What’s more – you can even get your first month free! Just use coupon code PROGRAM at checkout. You can go here to learn more about the AAC and join! 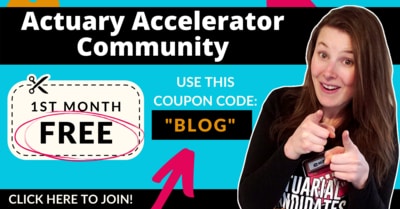